Happy St. Patrick’s Day and the month of the Shamrock Shake.  Bringing back memories of my husband’s favourite date treat with his grandmother.  She lived into her 90’s and it was something they shared a love of together.  The flavours are quite easy to recreate in a cupcake.  I only put the mint in the icing making a Shamrock shake icing and leave the rich taste of vanilla that comes through in the cupcake.  You could add mint flavouring to the cupcake as well, but you may find it to be too much.
I teamed this cupcake with a memory of my childhood and something I did for my children a few times when they were younger, Money Cakes.  My mom would wrap coins in tinfoil or waxed paper and place them throughout the cake.  Each slice would find 1 or 2 little packets of coins.  I remember being so excited to cut into that cake.  I had friend Julie, who’s mom would make the same type of cakes for her family.  Great memories.  When I had young children I made money cakes for them a few times.  My little boy (who loves saving money) would be so excited to get his piece of cake, open his little packet of money, and then run to his piggy bank all with the biggest smile.  Every so often in a money cake someone doesn’t find any coins 😦  along came the money cupcake idea… Everyone is guaranteed to come away with a coin 🙂  Save the day…..  See the bottom of the this post for more “money cupcake decorating ideas”

Preheat the oven and place the liners into the cupcake pan.  Prepare Vanilla Cake mix as per directions.

Optional* Add a small amount of food coloring to the cake batter. 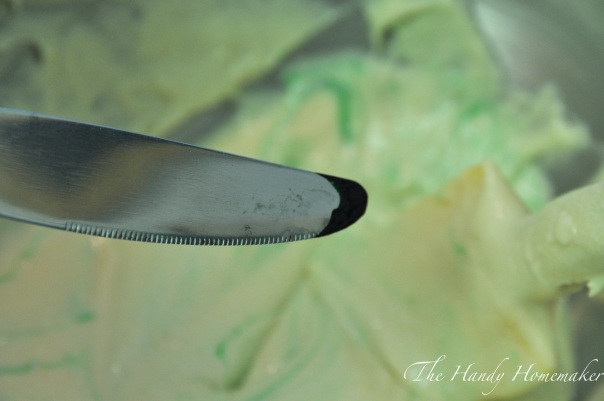 A little goes a long way, start by adding a small amount, mixing and adding more for a deeper tone. 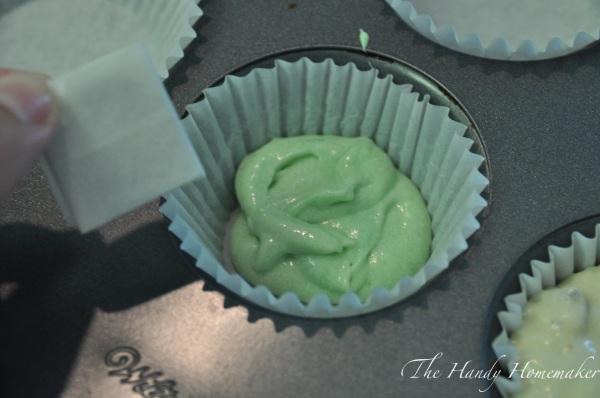 Place one tablespoon of the batter in the cupcake liners.  Place the coin wrapped in parchment or tinfoil in the center of the batter.

Gently press the coin in the batter and repeat for each cupcake liner.

Cover the coin with more batter and fill until the cupcake liner is about 3/4 full. 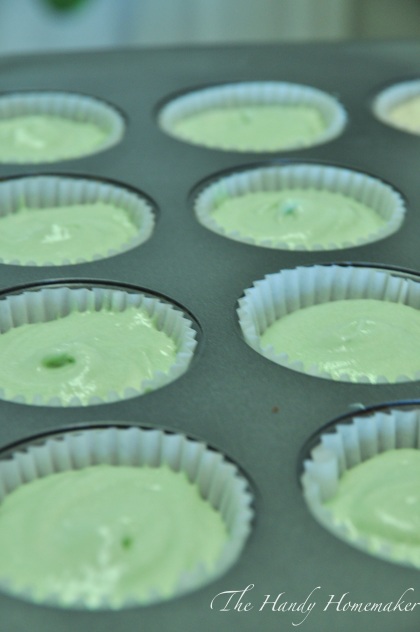 Place the cupcakes in the preheated oven and bake until the edges just start to turn golden.  18-20 minutes.  You may also use a wooden pick to test, it should be mostly clean of cake when pulled out.  If batter is remaining on the wooden pick leave for one minute longer and test again.  Remove from oven let rest for 2-3 minutes and then place on a rack to cool.

Once cool top with Shamrock Shake Buttercream icing, shown here with a swirled icing made with a wilton 1M star tip.  Enjoy!  To get the same effect for display add a paper straw cut in half, and set the cupcake in a new cupcake liner.

Now look for the surprise!

You should warn your guests that there is a surprise and that breaking the cupcake open and removing the surprise before eating is important.  Also I wouldn’t suggest making these to serve to small children. 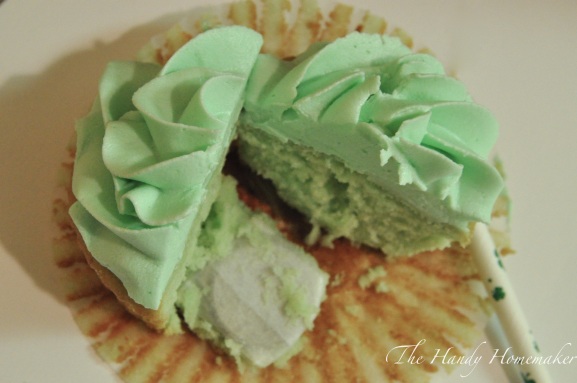 Money in a cupcake = Happy Children

How to prepare the coins for the cupcakes:

I have a feeling my mother never sterilized the money before wrapping in tinfoil or waxed paper.  I, however….insist on it.

Use parchment paper, waxed paper, or tinfoil cut in small strips or squares.  In Canada we have Loonies (1$ coins) and Toonies (2$) coins.  These work awesome.  Quarters will work as well just wrap 4 of them together.

Fold the edges in on both sides, press flat 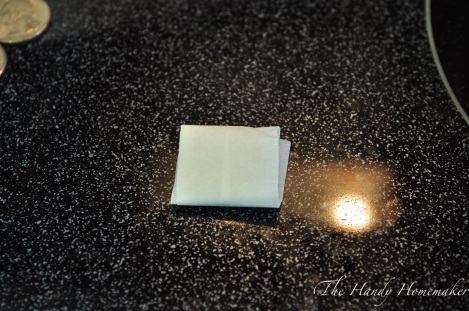 Using a large wilton 12 round tip.  Pipe small bubbles of Vanilla Buttercream icing over each other to get a cloud effect.  No clouds are alike so it’s okay that the icing clouds won’t be either.

Once the cloud is finished, tuck the ends of the rainbow stripe licorice candy in on opposite sides to make the licorice stay in place to look like a rainbow.  What a surprise to find the gold (Loonies, toonies, or quarters) inside the cupcakes 🙂

Just because I love pop rocks!!  With a large star tip (wilton 21) Pipe Vanilla Buttercream in a swirl pattern and sprinkle with pop rock candy.  Tropical punch is green and teal.  Easy Breezy!!  And it works great for St. Patty’s Day!!

Eat the rest of the pop rocks.. Because your a kid at heart!! xo